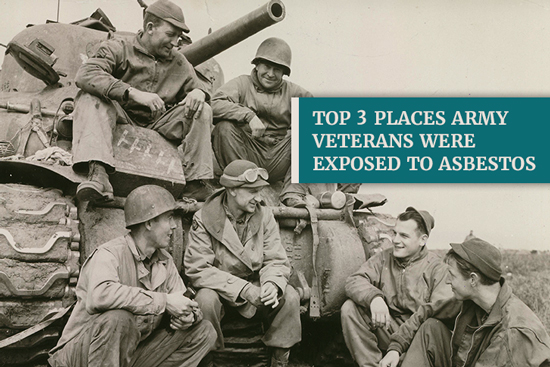 The Army is considered the largest and oldest branch of the United States Military. Like other branches, they aim to serve the American people and defend our nation.

Asbestos was used in the Army as well as every other branch of the military for most of the 20th century. While soldiers were bravely protecting our freedoms, they were also coming in contact with this toxic substance on a daily basis.

Up until the late 1970s, asbestos was used primarily for its durability, affordability and fire resistant properties. Unfortunately, this put many soldiers’ health in danger as it increased their chances of inhaling tiny asbestos particles.

Inhaling or ingesting asbestos can lead to a rare and aggressive cancer known as mesothelioma. It can take years or even decades after their exposure in active duty to see any symptoms of this disease. This is why many veterans continue to be diagnosed with this deadly cancer well after their time serving in the military.

If you or your loved one is an Army veteran and has developed mesothelioma, there are financial options available for you. At BCBH Law, we have helped thousands of veterans recover compensation for their cancer. Contact us today to see how we can help you and your family receive the justice you deserve.

Combat and support vehicles contained a significant amount of asbestos products. Brake pads, heating systems, clutches and gaskets all contained this toxic substance for its heat resistant property. Almost all military vehicles were made with asbestos prior to the 1970s when strict regulations on its use were put in place. Vehicles that contained asbestos ranged from ambulances to tanks to helicopters.

During World War II, the United States Army Air Forces produced over 60,000 aircrafts. Many of the crew members, pilots, and mechanics faced a high risk of asbestos exposure. Since there was such a demand during this wartime period, asbestos use was averaging about 783 millions pounds produced per year.

Veterans were most likely to come in contact with asbestos in Army barracks. Since fire resistance was a significant part of construction in the military, many barracks across the world contain asbestos. Common areas that used asbestos include:

Before regulations, construction materials were the most common products to contain asbestos.

While soldiers were exposed to asbestos in their living spaces, this exposure was minimal unless remodeling was taking place. Soldiers who most likely faced the largest risk of exposure belonged to the Army Corps of Engineers.

This group of soldiers was tasked with the construction of various facilities and other projects like locks and dams. Most of the Army and Airforce’s infrastructure were built by the Corps of Engineers. Unfortunately, soldiers who were involved with the first-hand construction of Army barracks encounter asbestos the most.