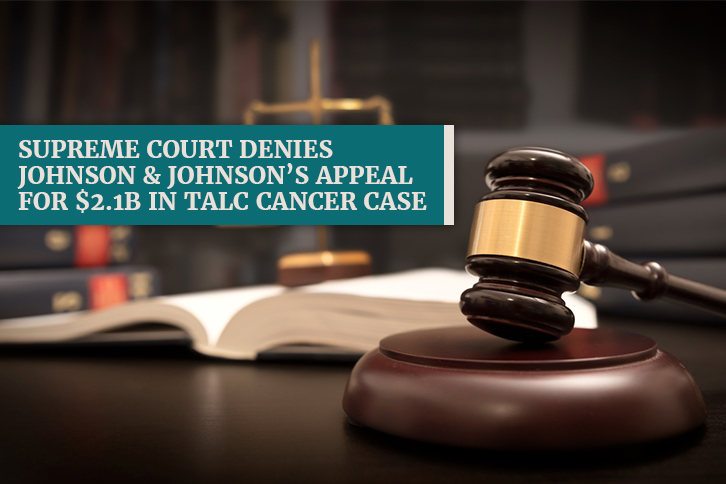 The Supreme Court rejected an appeal by Johnson & Johnson to undo a $2B talc baby powder verdict against them over allegations of women claiming they developed ovarian cancer from using the company’s talc products.

In an order with no noted dissents, the court declared that they refused to hear J&J’s objections from the St. Louis jury findings in 2018.

In preparation for denial of their appeal, the company announced in February that they had set aside $4B for this verdict. Today, J&J faces more than 21,800 lawsuits over their talc based products.

The root cause of this appeal stems from J&J believing they didn’t get a fair chance in the 2018 Missouri trial. This trial resulted in an initial $4.7B verdict in favor of 22 women who used talc products and later developed ovarian cancer.

Last year, a state appeals court reduced the penalty J&J faced by more than half as well as eliminated two of the plaintiffs. However, the court still upheld the outcome after both sides shared expert testimony on whether the company’s baby powder contained asbestos and if the asbestos-laced talc could even cause ovarian cancer.

The jury still found in favor of the women on both of these points and judge Rex Burlison, wrote that evidence in trial showed “particularly reprehensible conduct on the part of Defendants.” He also concluded that J&J “knew of the presence of asbestos in products that they knowingly targeted for sale to mothers and babies, knew of the damage their products caused, and misrepresented the safety of these products for decades.”

Health concerns regarding talcum based cosmetic products have sparked thousands of lawsuits by people across the United States. Asbestos is a known carcinogen and is located geographically close to talcum as they are both minerals mined from the ground. The close proximity makes it easy for this toxic substance to contaminate any talc close by.

In May 2020, J&J announced that they would take their iconic talc-based baby powder off the shelves in the U.S. and Canada. This decision was made after a reduced demand “fueled by misinformation around the safety of the product and a constant barrage of litigation advertising.”

For Johnson & Johnson, the Supreme Court’s ruling left them with many unanswered legal questions according to the company’s spokesperson.

However, the 20 families whose lives were affected by this terrible disease now get the compensation and justice they deserve.