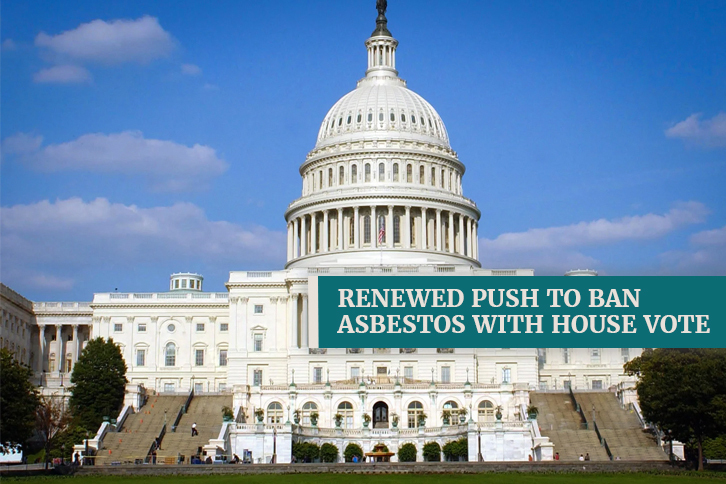 A bill banning the use of asbestos has been patiently waiting on the U.S. House of Representatives docket since November 2019.

While this type of bill should’ve been passed years ago, we are now steps closer to a wide-scale prohibition of this toxic substance.

Since the House of Representatives is currently in session, one activist organization recently made a renewed push to get the bill passed. The Asbestos Disease Awareness Organization (ADAO) put together an online petition urging lawmakers to approve the proposal.

The goal of this petition was 150,000 signatures before August 7th, when the ADAO planned to send it to the house. The petition recorded more than 142,000 signatures, a strong demand for the U.S. government to take a long-overdue action to protect Americans’ health.

Why Should Asbestos Be Banned?

Asbestos is the only proven cause of mesothelioma, a rare and aggressive type of cancer. Each year, doctors diagnose this disease in approximately 3,000 Americans — and many more people worldwide.

Alan Reinstein is a mesothelioma victim who passed away in 2006. Since then, his wife Linda Reinstein has co-founded and led the ADAO. The organization’s priority is raising awareness of asbestos’ dangers — and pushing for a government ban of asbestos for commercial purposes.

The bill under consideration is called the Alan Reinstein Ban Asbestos Now Act of 2019. This proposal would prohibit anyone from mining, manufacturing and distributing asbestos or any asbestos-containing products.

In November 2019, the House Energy and Commerce Committee made the last legislative action. The committee voted 47-1 in favor of sending the bill to the House. The bill will then move on to the Senate if the House approves the proposal.

While the Environmental Protection Agency (EPA) pushed to ban asbestos around 31 years ago, its attempt was unsuccessful. Today, there are hopes that this new bill will finally put an end to using a substance that is so toxic to the body.

The United States is one of the few industrialized countries that still allows commercial use of asbestos. According to the Journal of Occupational Medicine and Toxicology, more than 60 nations have already completely banned asbestos.

Last year, the U.S. imported 100 tons of asbestos. This number has decreased significantly since the late 1970s, when the country consumed more than 700,000 tons of the carcinogen.

Before any regulations, asbestos was used abundantly for its durability and resistance to heat. It could protect schools, homes, offices, entertainment venues, automobiles, military aircraft and ships, military buildings and more from fires.

It also put millions of American workers in harm’s way and has resulted in hundreds of thousands of deaths — and maybe more.

The use of asbestos commercially has decreased significantly, with the chlor-alkali industry the primary commercial sector still using the substance. However, careless manufacturing procedures may lead to asbestos contaminating products, such as talc cosmetics or even children’s crayons.

For unknown reasons, the commercial use of asbestos is still up for discussion. Even the current EPA hasn’t committed to fully banning asbestos.

Since there is no safe level of asbestos, only a complete ban of this cancerous substance will protect current and future Americans from any health risks. That’s why the House should vote immediately to ban asbestos. Hopefully at some point in 2020, the Alan Reinstein Ban Asbestos Now Act will switch from bill to law.