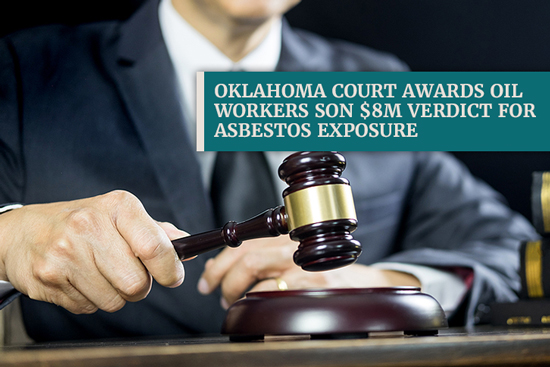 A jury in Oklahoma has recently awarded an $8 million verdict to the family of an oil field worker’s stepson who died of mesothelioma back in 2016.

Brennan James A. passed away at the age of 38 after receiving his cancer diagnosis. As a child, he was exposed to raw asbestos products manufactured by Union Carbide Corporation and distributed by Montello Inc. He was also exposed to asbestos from drilling rig products constructed by National Oilwell Varco.

After a trial in May of 2019, a jury awarded Brennan’s family compensatory damages. They found that Mr. A’s mesothelioma was a result of secondary asbestos exposure. The jury concluded that asbestos fibers and dust were brought into the home on the clothing of his stepfather. They also found the defendants were negligent for failing to warn workers of the health risks associated with using asbestos products.

As a result, Brennan was vulnerable to inhaling this toxic substance on a daily basis throughout his childhood. This was ultimately the main cause of his mesothelioma diagnosis decades later.

“Despite their claims that they sought to introduce this evidence in order to relieve themselves of the legal duty to give better warnings, it is clear that their effort was to relieve themselves of that duty by passing it along to third parties, such as Mr. Pratt’s employers or the companies that purchased the drilling mud product from Montello,” according to the court’s opinion. “The trial court’s order outlawing such blame-shifting was properly entered.”

In response to the causation problems the defendants had, the court found that based on evidence as well as testimony from a co-worker of Brennan’s stepfather and an expert witness of the plaintiff, a jury could conclude that asbestos containing products made by the defendants were used during the applicable time period.

If you or your loved one has been diagnosed with mesothelioma from secondary asbestos exposure, the lawyers at BCBH Law are ready to fight your case. Fill out our free case evaluation form today to see how we can help you and your family receive the compensation you deserve.