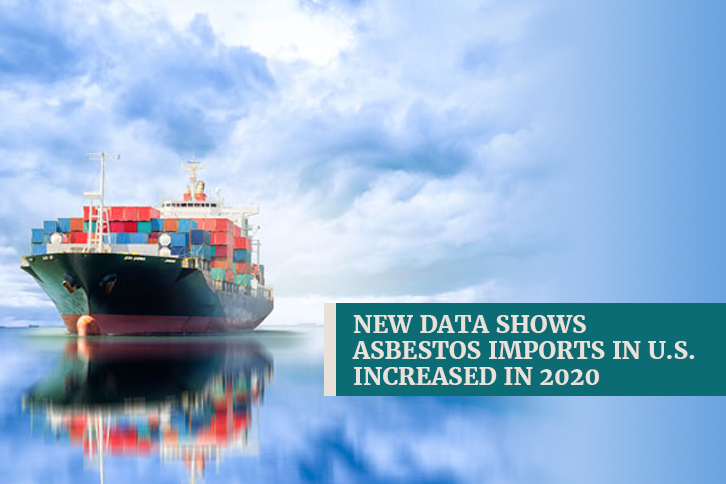 According to a recently released U.S. Geological Survey Mineral Commodity Summaries report, the United States significantly increased the country’s asbestos import in 2020. This annual report takes into account the import and export of a variety of minerals, including asbestos.

Any asbestos that is imported goes to the chlor-alkali industry for the manufacturing of semipermeable diaphragms to make chlorine. Fortunately, this deadly mineral is no longer used to construct any buildings, homes, automobiles and military ships and aircrafts like it was for most of the 20th century.

While the use of asbestos is now heavily regulated, it was once a staple in the U.S. economy. Between the 1950s and 1970s the U.S. consumed the most raw asbestos including both domestic and imported.

Unfortunately, people during this time had little to no idea of how dangerous it was to their health. Asbestos is the only known cause of a rare and aggressive cancer known as mesothelioma. Today, approximately 3,000 people in the U.S. are diagnosed with this disease each year.

How Much Asbestos Does the U.S. Consume Each Year?

The U.S. imported nearly 300 tons of the toxic substance in 2020. This amount is nearly doubled compared to the previous year’s 172 tons.

Here are previous years of the United States’ consumption of raw asbestos:

The report also concluded that the asbestos was imported from Brazil (86%) and Russia (14%) and that it all consisted of the chrysolite type.

The last U.S. asbestos mine closed in 2002 leaving domestic consumers dependent on imports ever since. While asbestos consumption increased last year, there has still been an overall significant decrease compared to previous years.