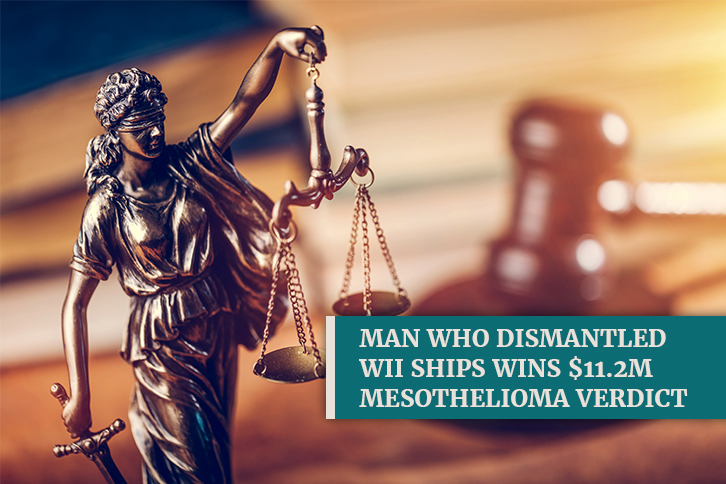 On August 5th, a jury awarded a 75 year old Tacoma man $11.2M for his terminal mesothelioma diagnosis. To date, it is one of the largest jury awards of its kind in the state of Washington.

Mr. Woodruff, the plaintiff, was exposed to asbestos while he worked for Zidell Dismantling from 1970 to 1973. He spent three years dismantling World War II Navy ships at the Port of Tacoma unaware that he was exposed to toxic asbestos particles.

Zidell Explorations, the sister company of Zidell Dismantling, was found to be negligent and to have caused his deadly cancer during his time at their company. The jury also found the port liable, however, there wasn’t enough substantial negligence in causing Mr. Woodruff’s illness.

That means the port is not liable for any amount of the total verdict and Zidell will pay the $11.2 million.

While working for Zidell Mr. Woodruff was responsible for dismantling the navy ships, which included ripping off insulation during this process. This exposed him to hazardous levels of asbestos throughout his time working both on and off ships at the job site.

In court, the defendants argued that Mr.Woodruff should’ve worn a respirator. However, he testified that he had no knowledge that asbestos-containing insulation was deadly and therefore, did not wear any protective equipment.

Other witnesses employed at Zidell confirmed extremely dusty and dirty working conditions during the same time period. This means that employees probably inhaled and ingested toxic particles every time they went to work.

Zidell allegedly promised the port that they would follow safety protocols and that the work site was safe. Decades later, studies showed asbestos still in the soil.

In a statement, Eric Johnson, executive director of the Port of Tacoma said, “We are very sorry to learn about Mr. Woodruff’s illness and send caring and compassionate thoughts to him and his family.”