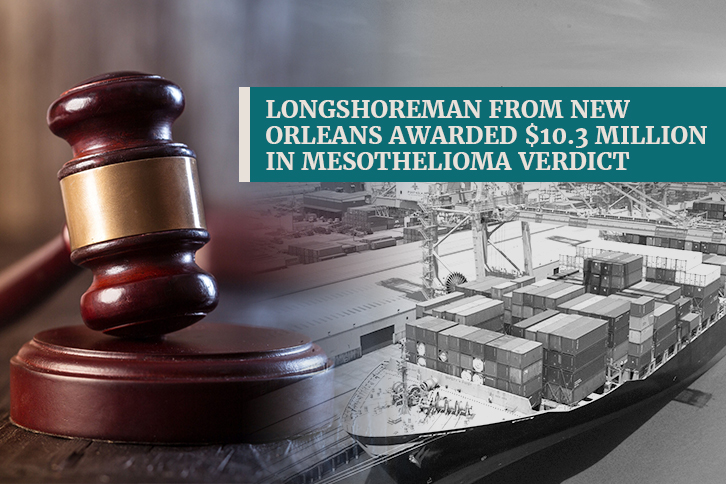 At the beginning of the month, a New Orleans jury awarded a former shipyard worker more than $10.3M in a mesothelioma lawsuit. This comes to no surprise as shipyard workers face some of the highest rates of mesothelioma compared to all other occupations.

The former longshoreman, who unloaded raw asbestos off ships more than 50 years ago, was diagnosed with mesothelioma last year. He had followed in his fathers footsteps working in the wharfs in New Orleans unloading this toxic material from 1964 through 1968.

Prior to working in the shipyard, he also said he was exposed to asbestos dust for years when his father came home from work with asbestos particles still lingering on his clothing.

In the 1960s, the United States economy still very much relied on asbestos. Unfortunately, many scientists didn’t connect asbestos exposure to mesothelioma at the time. It wasn’t until a decade after the longshoreman stopped working in the shipyard that the revelation was made.

However, the companies that produced and profited off this toxic substance knew of the health hazards. Their negligence and lack of warning to their employees and consumers is why so many are liable for lawsuits.

The case was against Ports America Gulfport Inc., Cooper T. Smith Stevedoring Co. Inc. and South African Marine Corp. ll three asbestos manufacturing companies played a role in the man’s mesothelioma diagnosis. These companies were found liable, however, said they never worked with asbestos or even employed the defendant.

According to court documents, the former shipyard worker testified that neither him nor his father were warned of the dangers. The defendant alleged the companies “ignored or concealed such information, or condoned such concealment, in order to sell or use asbestos or asbestos-containing products and to avoid litigation by those who were injured from asbestos inhalation.”

At BCBH law, we have helped many former shipyard workers as well as people in other high risk occupations receive justice for their mesothelioma. You or your loved one can take legal action against the companies responsible for your cancer. Contact one of our attorneys today to see what financial options are available to you.