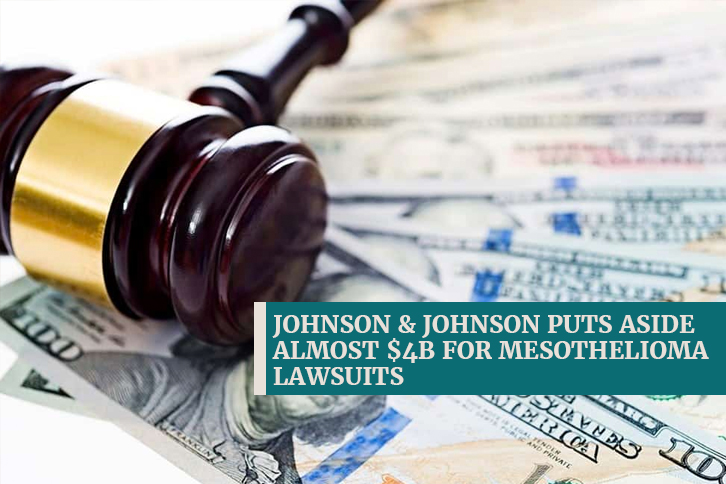 Johnson & Johnson Puts Aside Almost $4B for Mesothelioma Lawsuits

Johnson & Johnson has been faced with thousands of lawsuits from plaintiffs who believe their baby powder is laced with asbestos.

Last month, the company announced that they had set aside $3.9B in 2020 for litigation expenses. They said the money was “primarily associated with talc related reserves and certain settlements.”

This comes to no surprise as the company has already paid out millions to former users who claim their cancer was caused by asbestos in J&J’s talc based baby powder product.

The safety concern comes from a 2018 Reuters investigative report stating the pharmaceutical giant knew for decades that asbestos was in the talc. Internal records and evidence showed that from the 1970s to the early 2000s, J&J’s raw talc sometimes tested positive for small amounts of this toxic substance.

According to the New York Post, the company currently faces around 25,000 lawsuits over the alleged link to cancer. However, sources do not specify how many cases involve mesothelioma.

In 2020, J&J settled more than 1,000 talc cancer claims. The company setting aside funds was likely a move to help settle thousands of future claims in order to avoid large lawsuit verdicts.

While they have attempted to fight previous mesothelioma lawsuits regarding their talc products, it hasn’t always worked out in their favor.

Last year, a Missouri court ordered Johnson & Johsnon to pay $2.1B in damages to 22 women who linked their ovarian cancer to its products. J&J is appealing this case to the U.S. Supreme Court.

Johnson & Johnson stated that, “the company continues to believe that it has strong legal grounds for the appeal of this verdict, as well as other verdicts that it has appealed.”

A couple in Brooklyn was also awarded $120 million in damages by a New York court in November. The woman blamed her cancer on asbestos exposure from its baby powder.

J&J announced in May of last year that they would stop selling talc based products in the U.S. and Canada. The company made this decision due to a change in consumer habits and “misinformation around the safety of the product and a constant barrage of litigation advertising.”