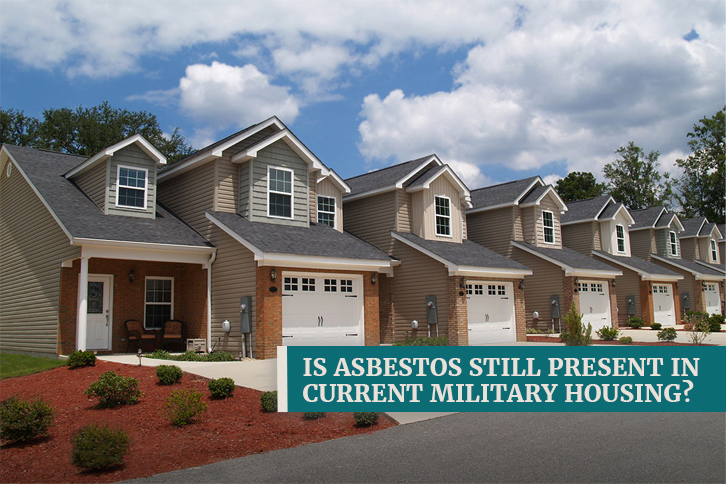 Thousands of U.S. military families living in government-owned housing around the world face health and safety risks, according to a recent report done by the Department of Defense Office of Inspector General.

After an inspection of 8 military bases, 7 being outside the U.S., there were findings of systemic deficiencies in the management and mitigation of numerous health risks, including asbestos.

Asbestos was widely used in the military for most of the 20th century. Many buildings and ships were built with this toxic substance because of its excellent fire retardant and insulating properties. However, it wasn’t until health officials linked asbestos exposure to mesothelioma that its usage in the military stopped, or so we thought.

The widespread use of asbestos is the main reason veterans make up the largest group of people diagnosed with mesothelioma. Unfortunately, the threat of asbestos exposure is still lingering in many military buildings and family housing units worldwide.

The U.S. Department of Defense’s (DoD) lack of oversight and outdated policies continue to put many veterans and their loved ones’ health in danger.

The Purpose of Evaluating Military Housing

In September 2018, Congress asked for an evaluation of military family housing. The main purpose of this investigation was to uncover any hazards families were being exposed to. The evaluation also took into account what procedures were in place to properly identify and alleviate these safety risks.

What started with an initial focus on lead-based paint, expanded into other issues such as dangerous levels of asbestos, radon, mold and drinking water quality. Overall, there were nine potential hazards examined.

In total, the Marine Corps, Air Force, Navy and Army own and operate 36,000 units abroad. Military housing is currently divided into two categories: privatized units or government owned units. With approximately 99% of all housing in the United States being privatized, there are roughly 2,000 government-controlled units inside the U.S. today.

Asbestos exposure was a crucial part of the recent evaluation of housing. Asbestos is a substance that was once abundantly used throughout every branch of the military. For decades, it was often used in the construction of new buildings and found in:

The DoD has policies enacted to ensure safe and reliable housing for its military members and their families. One of the policies they are required to uphold is supplying affordable, well-maintained and hazard-free living.

Unfortunately, some of these standards were not adequately met when investigated. During the evaluation, the DoD Office of the Inspector General revealed there were flaws in the management of military housing.

According to the report, the were many deficiencies found related to asbestos which included:

While recommendations were made to correct the problems at hand, many families in government housing will continue to be affected by these hazards. Until housing is completely rid of asbestos, military members and their families will continue to run the risk of exposure. This unfortunately puts past and possibly future residents at an increased risk of developing mesothelioma in the following years to come.