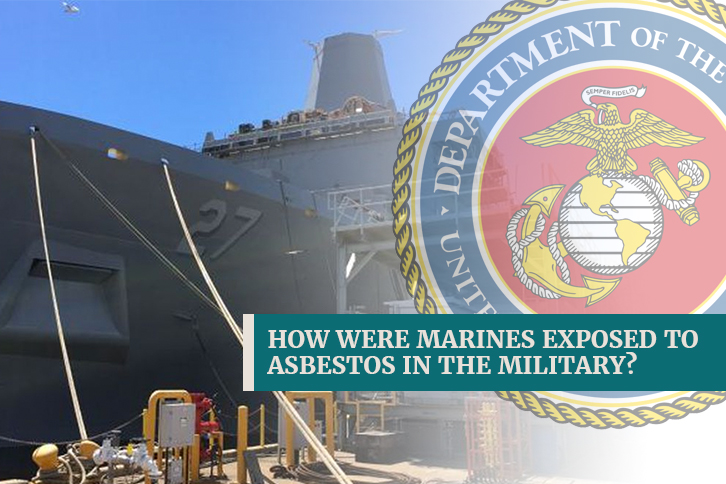 How Were Marines Exposed to Asbestos in the Military?

The United States Marine Corp (USMC) is considered the smallest branch of the military, however, there are over 2 million veterans. Like all other military veterans, they play an important role in defending and fighting for our country.

Unfortunately, many marines bravely protected our nation while unknowingly coming in contact with a deadly substance: asbestos.

For most of the 20th century, every branch of the military used an abundance of asbestos because it was affordable, extremely durable, and fire resistant. As a result, countless marines came in contact with this toxic substance on a daily basis.

Exposure to asbestos can lead to a rare and aggressive cancer known as mesothelioma. Many veterans do not see any symptoms until years or even decades after their exposure while on active duty. For this reason, veterans continue to be diagnosed with asbestos related illnesses well after their retirement from the military.

If you or your loved one is a marine veteran and has developed mesothelioma, there are compensation options available for you. At Bullock Campbell Bullock and Harris, we have helped thousands of veterans receive compensation for their cancer. Fill out our free case evaluation form today to see how our attorneys can help you receive the justice you deserve.

Almost all the ships built by the military contained large amounts of asbestos. Asbestos fireproofing and insulation was used throughout ships for its proven resistance to heat and chemical damage. Dining and sleeping quarters, boiler and engine rooms along with pipes were all built or covered with asbestos products.

Many marines were transported on ships when the use of asbestos was widespread. Small confined spaces and poor ventilation meant marines were often exposed to asbestos on a daily basis. Marines who were stationed on ships for prolonged periods of time had the greatest risk of exposure.

While it wasn’t common for marines to work in shipyards, they may have been assigned to work as guards. Shipyards contained higher concentrations of this toxic substance since shipbuilding required raw asbestos materials. This made it very easy for fibers to enter the air and be ingested or inhaled by anyone nearby.

Marine bases and barracks were built with many construction products that contained asbestos. These products included roofing materials, floor tiles and pipe and boiler insulation. This toxic substance was also used to line marine barracks to keep them from catching fire.

Marines were exposed to asbestos the most in their sleeping quarters as any disturbance in their quarters could have released these deadly fibers into the air. Oftentimes, asbestos particles would accumulate as fine dust on the marines bed.

Fortunately, in the mid-1970s, the dangers of asbestos became public knowledge and the military banned the use of it in all new construction. However, many contaminated ships, vehicles and buildings remained in service for many years after.

In May of this year, a report completed  by the Department of Defense Office of Inspector General found that 38,000 military housing units contained numerous health hazards, including asbestos.

There have also been documented asbestos contamination at Marine Corps bases such as:

Marine veterans who have developed mesothelioma from their time in the service can file for VA benefits. Filing a VA claim is the most common way for veterans to receive compensation for their cancer diagnosis. Contact one of our experienced lawyers to begin the mesothelioma claims process today.