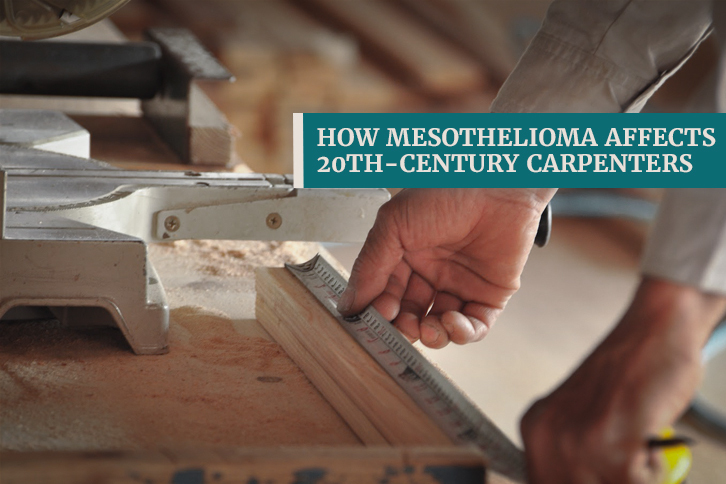 Between the 1940s and 1980s, asbestos was a daily hazard for a variety of construction trades. Plumbers, pipefitters, electricians and carpenters went to work either thinking asbestos was a safe and reliable material — or not knowing enough to give asbestos a second thought.

Little did they know the damage it was causing to their health.

Out of all American industries during the 20th century, construction was most linked to asbestos exposure. And of all the jobs in the construction industry, carpentry is among the highest for risk of exposure and asbestos-related diseases.

Mesothelioma is the most notorious of these asbestos health issues. It’s a rare cancer, one of the diseases linked to asbestos exposure. Asbestos is the sole contributor to over 3,000 cases of mesothelioma each year in the United States.

After numerous warnings from scientists and health officials, companies continued to manufacture and sell asbestos-containing products. Blue-collar construction workers, such as carpenters, were tasked with using these products and installing them into buildings. Many carpenters and their families suffered due to these negligent decisions.

If you or your loved one worked in carpentry and developed mesothelioma, there may be compensation available for you. The attorneys at Bullock Campbell Bullock & Harris have stood by mesothelioma patients to help them recover compensation for their disease. Fill out our free case evaluation form to see what financial options are available to you.

Before regulations limited its use, carpenters faced a significant risk of asbestos exposure on a regular basis. Studies show that carpentry is among one of the most at-risk occupations.

According to the British Journal of Cancer, a preliminary analysis showed that carpenters were at the highest risk of exposure compared to other construction workers. In 1992, the source reported 93 known mesothelioma diagnoses involving carpenters in Great Britain.

The risk was high for American carpenters, too. For decades, carpentry was considered an extremely dangerous occupation in the United States due to asbestos exposure. According to an article published by the American Journal of Industrial Medicine in 1997, there was proof of carpenters’ increased risk of asbestos diseases.

How Were Carpenters Exposed to Asbestos?

Asbestos was the main material used in most residential and commercial construction prior to the 1980s. The main part of a carpenter’s job involves creating the structures and foundation of buildings. Oftentimes, carpenters are tasked with a variety of jobs, such as:

Many components carpenters used — from ceiling tiles to molding — contained toxic asbestos fibers during the 20th century. Asbestos was cheap to produce and readily available, making it a staple material in America’s construction industry. It was also fire-resistant, heat-resistant and extremely durable. These qualities are why companies elected not to discontinue its use, even after news of its detrimental health effects surfaced.

Carpenters ran the risk of inhaling or ingesting loose asbestos fibers while working. The risk of exposure was increased because loose fibers floating in the air could not be seen. Oftentimes, carpenters would not wear adequate safety equipment to protect themselves from the hazards.

At Bullock Campbell Bullock and Harris, our attorneys have helped many construction workers — carpenters included — receive compensation for their disease. For example, our lawyers have represented:

We understand that workers in this industry were wrongfully exposed to this toxic substance, and many now suffer from a disease that should’ve been prevented. If you or your loved one was diagnosed with mesothelioma, our attorneys are here to fight for your case. Contact us today to see how we can help you get the compensation you deserve.