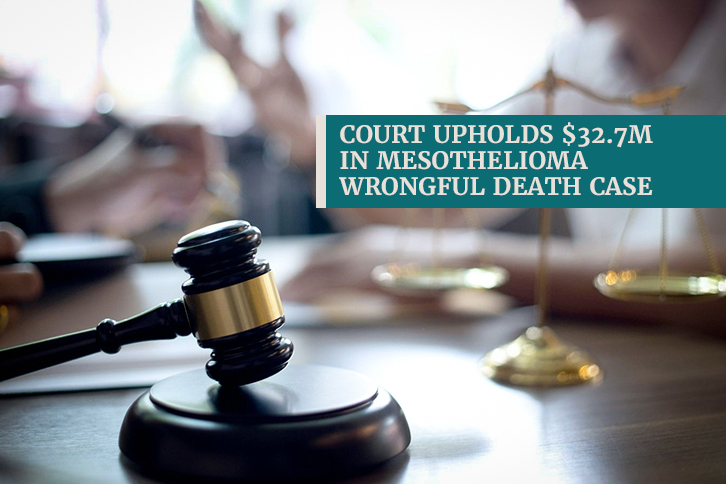 Back in August, the U.S. Court of Appeals for the Fourth Circuit upheld a $32.7 million jury award to the widow of a tire factory worker who lost his life to mesothelioma.

Amy Finch, his widow, sued Covil Corp., a pipe insulation company that sold nearly all the insulation needed to construct the entire plant.

Franklin Finch was an employee for the plant from 1975 to 1995 spending most of his time as a mold changer in the curing  room where 120 steam tire press machines were housed. He placed molds into tire press machines and removed them when they were in the shape of a tire.

Problems with the pipes at the tire plant were common causing Mr. Finch to repair old insulation or clean up debris from around the machines.  According to Finch’s deposition testimony, he recalls the asbestos-containing pipe was removed and replaced in his presence, creating a visible dust. Almost all of the external pipes that connected to the tire press machines were covered in asbestos insulation.

Unfortunately, due to his occupation and surroundings, Mr. Finch was diagnosed with mesothelioma in March 2016 and suffered greatly until he passed in January 2017. Ms. Finch filed the wrongful death lawsuit against Covil for their negligence and failure to warn about the dangers of asbestos which led to her late husband’s death.

After a 5-day trial, the North Carolina jury found Covil liable, and awarded her $32.7 million in compensatory damages.

Covil argued that there was not sufficient evidence presented in court and that the jury’s award was excessive. The district court denied Covil’s motion, holding that Ms. Finch did, however, provide thorough and circumstantial evidence and that Covil knew the dangers of asbestos at the time and sold asbestos-containing products to the factory.

The evidence also supported that exposure to these asbestos-containing products was the direct cause of Mr. Finch’s death. Ms. Finch presented evidence that her late husband routinely experienced asbestos exposure working in close proximity to the pipes, where dust could be released into the air just by bumping into them. There was also poor air circulation throughout the factory which allowed for higher concentrations of asbestos to be inhaled or ingested.

The court was able to prove that Covil had information as early as the 1960s that stated asbestos was unsafe and caused mesothelioma. The company started selling hazardous products to the tire factory in 1973 without any warning.

In regards to the jury’s large verdict, the Fourth Circuit relied on state laws, and stated “without evidence of passion or prejudice, we cannot replace the jury’s considered judgment with our own, or with an amount that Covil would prefered,” finding that Mrs. Finch’s evidence in trial was supportive of the award.