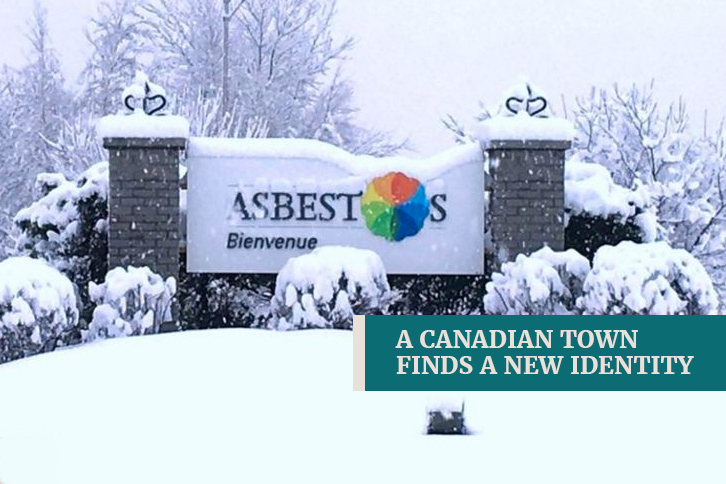 Back in October 2020, residents in Asbestos, Quebec, lined up to vote on a new name for their town. The town’s council proposed this change as the name Asbestos has garnered many negative reactions over the years.

At the beginning of last month, the name change took place and the town will now be known as Val-des-Sources, which means ‘valley of the springs’ in French.

The town, which is 80 miles from Montreal, once took pride in their namesake which proved to be an asset in the late 1800s. However, in recent decades the name Asbestos has been more of a liability.

Mayor Hugues Grimard told CBC News, “There is really a negative perception around asbestos,” referring to a banned carcinogenic mineral that was mined there for more than a century.

“We have lost businesses that don’t want to establish themselves here because of the name.”

This area once was home to the Jeffrey Mine, one of the largest chrysotile asbestos mines in the world, according to CBC reports. The town was built up around it and just kept growing. The name was established when the Royal Mail started calling it after the mineral, explained Jessica Van Horssen, a historian and the author of A Town Called Asbestos.

“There was a lot of pride in the work that the residents were doing in the mine,” said Van Horssen.

“It’s very easy for us to forget that there was a time before people knew asbestos was poison.”

Asbestos is a naturally occurring mineral that was once widely used because of low cost fireproofing and insulation properties. These toxic fibers, when inhaled or ingested, increase the risk of developing asbestos-related diseases such as mesothelioma or asbestosis. In 1987, the World Health Organization officially declared asbestos a human carcinogen.

While the Jeffrey mine closed in 2011, Canada didn’t decide to completely ban the use of asbestos products until 2018.

Many people’s perception of asbestos has changed throughout the years as its cancer causing properties have become common knowledge. Outsiders were scared of the town’s name and oftentimes refused to bring their business. This reaction has resulted in economic disadvantages, according to Louise Moisan-Coulombe, a wife of the former mayor.

Fortunately, there’s hope that a new name change will allow new investors to feel confident in bringing their businesses to town. The new name will shed a positive light and provide new opportunities for current and future generations of residents to come.