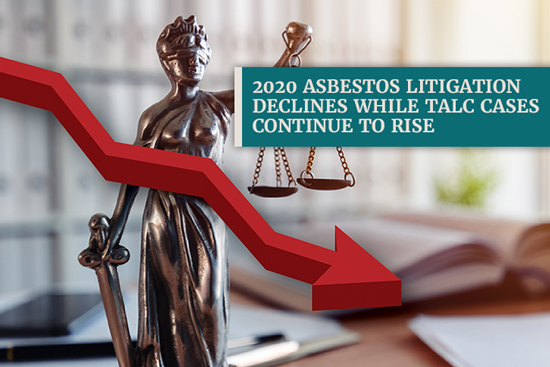 The amount of mesothelioma legal claims dropped slightly in 2020 according to a recent industry report. This was mostly likely due to the pandemic and the many federal and state courts that shutdown across the United States.

KCIC, a consulting firm in Washington D.C. that manages asbestos litigation and liability,  published their annual statistics last month. According to their report, there were 3,685 asbestos legal claims in 2020. There was an 11% drop compared to cases filed in 2019 (4,137).

These asbestos legal filings included both malignant and nonmalignant diseases in the U.S. Asbestos-related lung cancer filings decreased by 9% while mesothelioma cases have accounted for a majority of the decrease (14%) over the years:

In 2020, mesothelioma claims still made up 50% of the filings while asbestos lung cancer claims made up 40%.

While the drop could partially be a result of the global pandemic, asbestos has shown an annual decrease in filings over the last three years.

Asbestos is the only scientifically proven cause of mesothelioma. It irritates cells and turns them cancerous years after initial exposure. Manufacturers of asbestos products have faced lawsuits for decades after putting thousands of people’s health in danger.

Why the Decrease in Asbestos and Mesothelioma Claims?

According to KCIC, the coronavirus, especially in the early part of last year, contributed to a majority of the decline. From March 2019 to March 2020, there was an 18% drop in claims and from April 2019 to April 2020 there was a 27% decrease.

However, as the year progressed, KCIC reports that asbestos claims remained on track with rates from previous years. This increase in the latter part of 2020 shows that victims are still ready to fight for their case.

Madison County, Illinois remains the favorable choice among mesothelioma victims to file asbestos claims. They take on three times more cases than any other jurisdiction. Out of the 1,100 claims submitted, 879 were mesothelioma cases.

There was also a significant increase in filings related to nonoccupational asbestos exposure. Compared to previous years, they were higher in 2020:

These claims refer to secondary exposure or talc cosmetics.

“These are cases where a plaintiff is exposed to asbestos, either primary or secondary, but the exposure is not through their employment,” the KCIC report states.

Over the years and more recently, claims regarding asbestos contaminated talc cosmetics have consistently made news reports. While it once only accounted for a small percentage of cases, victims are receiving massive verdicts for their cancer.

In 2016, the first lawsuit involving asbestos in talc and mesothelioma cancer was filed. Last year, there were more than 500 of those cases involving mesothelioma or lung cancer.