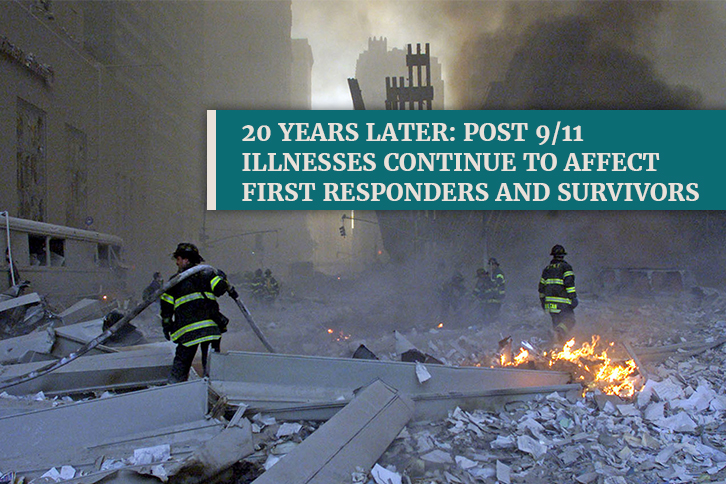 It has been 20 years since tragedy struck the United States on September 11th, 2001. Thousands of people went to work that day and unfortunately never returned home to their loved ones.

Decades have passed since the collapse of The World Trade Center, however, many first responders and survivors continue to be diagnosed with illnesses brought on by this tragic day.

When the towers collapsed, a toxic cloud of dust consumed the city and anyone nearby was exposed to a variety of carcinogenic particles: lead, mercury, dioxins, benzene, and asbestos. That day and for many weeks after, residents, first responders and survivors continuously ingested and inhaled loose asbestos fibers.

According to the World Trade Center Health Program (WTCHP), 410,000-525,000 people were exposed to nearly 2,000 tons of asbestos that was released into the air from the collapse. Unfortunately, even in 2001, many Americans still had no idea that asbestos could cause cancer.

Asbestos exposure causes a rare and aggressive cancer known as mesothelioma. Since it takes 20-50 years for mesothelioma to develop after exposure, it may be just the beginning of a wave of mesothelioma cases to come. So far, there have only been a few reported cases of 9/11 first responders diagnosed with this cancer.

Dr. Crane, the medical director of the WTCHP, stated the program is expected to start seeing lung cancers and mesothelioma 20 years after the attack. “I hope this will remain occasional and very rare, but we are all concerned about that pathway to lung cancer and mesothelioma,” says Dr. Crane.

Why Was There Asbestos in the Twin Towers?

The World Trade Center was built in the 1960s when the use of asbestos was still very much popular and not banned yet. Developers used asbestos for its durability and heat resistance. There was a variety of asbestos-containing products used throughout both of the towers.

At the time of construction, asbestos was considered a safe fire retardant, as it poses no threat when left undisturbed. The towers crumbling and collapsing meant thousands of sharp asbestos fibers being released into New York city.

So, Who is Most At Risk?

People living anywhere in lower Manhattan when the Towers collapsed were at risk of asbestos exposure. Specifically, the WTCHP states that anyone in a 1.5 mile radius from the Twin Towers. However, the most risk at people include:

Many first responders had no respiratory protection equipment while they were out saving lives after the attacks unknowingly breathing in these dangerous fumes.

If you were exposed to 9/11 dust it’s important to monitor your health regularly. Catching early signs of mesothelioma can lead to better treatment options and increased odds of survival. Through the WTCHP, responders and survivors can receive annual health checks and medical care for 9/11 covered conditions.