We always strive to protect your personal information

Angela began her asbestos litigation career in 1996 and has since successfully represented thousands of asbestos victims. As a mesothelioma lawyer, she continues to fight for the rights of mesothelioma and lung cancer victims — and their families. In doing so, she holds the liable companies responsible for their wrongdoing.

Get to Know Angela

Angela, from Olathe, Kansas, is the daughter of a United States Air Force veteran who served during the Korean War. Her mother was a small-town newspaper columnist and is now retired from an energy company.

Angela is a 1992 graduate of The University of Kansas. She graduated from the University of Tulsa College of Law in 1996, when she received the Order of Barristers for excellence in oral advocacy and the Dean Jensen scholarship award. Angela and her husband, Craig, have four children.

Bachelor of Arts from the University of Kansas, 1992

Juris Doctor degree from the University of Tulsa College of Law, 1996

Angela is involved in numerous charities and non-profit groups to help better the world and assist people in need. Her activist work includes: 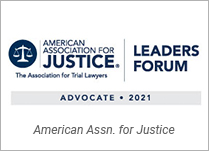